Ian Cheng, born on 29 March 1984 in the United States, is a rising star of the contemporary art scene. He is known for his live simulations that explores the capacity of living agents to deal with change. The boundaries between the fiction and the real have perhaps never been more difficult to define than in the simulation story. His work became popular immediately and has been widely exhibited internationally, including MoMA PS1, Serpentine Galleries, Whitney Museum of American Art, Hirshhorn Museum, Fondazione Sandretto Re Rebaudengo, Migros Museum, and other institutions.

When he was young, Cheng often went to the cinema with his graphic designer parents; this generated a great interest in the ability of movies to provide some truly stunning results that overwhelm our senses. With the inspiration of his family, Cheng studied in University of California, Berkeley and graduated in 2006 with a dual degree in cognitive science and art practice. However, going to art school did not turn him into an artist immediately. He started to work at Industrial Light & Magic, George Lucas’s visual effects company before he earned his MFA in Columbia University 2009.

“Technology is maybe the one underlying force that forces us as human beings to consider what the container of a human being really is and how much it can stretch or where it will break.” Ian Cheng said in an interview, A Portal to Infinity. [W.1] With a background of studying cognitive science and art practice, Cheng freed painting and sculpture from its solely descriptive duty in order to create a new language and role akin to other art forms. Cheng coined the term “live simulation”, a private game plays itself, he devised and popularized it as a medium available to artistic practice that capable of composing together both man-made and algorithmically generated content that together produce emergent behavior over an infinite duration. Since 2013, Cheng has produced a series of simulations exploring an AI-based agent’s capacity to deal with an ever-changing environment. 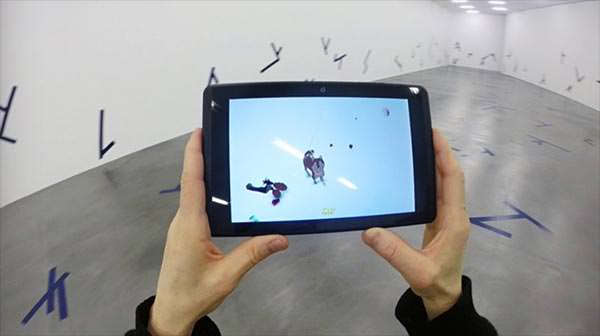 For the 2016 Liverpool Biennial, Cheng created a simulation story called Emissary Forks For you, the catch was it was only viewable through the Google Tango tablet, a system normally used 3D mapping. Using this system, the audience could interact with a dog that would come to play with and show them around. It was a mean to engage the audience into the work of art, not only by imposing one way of seeing, but also influencing the behavior as a visitor and the kinds of perspectives toward a landscape feature. The exhibition could not have happened without the presence of viewers which literally displaced the audience’s ‘real’ life with hours spent interacting in a virtual landscape. There is certain echoing between this idea and Relational Art originally observed and highlighted by French art critic Nicolas Bourriaud who defined a set of artistic practices which take as their theoretical and practical point of departure the whole of human relations and their social context, rather than an independent and private space. Bourriaud claims "the role of artworks is no longer to form imaginary and utopian realities, but to actually be ways of living and models of action within the existing real, whatever scale chosen by the artist." [W.2] The live simulation exactly created a social environment in which people come together to participate in a shared activity.

In 2018, Cheng exhibited part of his installation ‘Emissary’ in Louis Vuitton Foundation, Paris, the same city in which I now study. However, I missed it and the only thing I can do was to check his exhibition catalogue. I was totally lost in his imagination. The projections and installations exhibited here were scaled to encompass the viewers, amplifying the live experience. They were broadcasting different film or animation in the exhibition room without verbal communication but background music. Earth tone color dominated most of the frame, and some figures seem busy fighting or demanding something we do not fully understand. It pictured a narrative, but not sure when was the beginning of the story and what does this work try to reveal.

According to the interview by Kasper Bech Dyg at Cheng’s studio in New York city. ‘Emissaries’ (2015-17) is a series of live simulation works (‘Emissary In the Squad of Gods’ (2015), ‘Emisary Forks At Perfection’ (2015-16) and ‘Emissary Sunsets The Self’ (2017)) created using a video game engine. Described by the artist as “a video game that plays itself,” the works are comprised of computer-generated simulations like those used in predictive technologies for complex scenarios such as climate change or elections. The simulations evolve endlessly as self-contained ecosystems. [W.3] 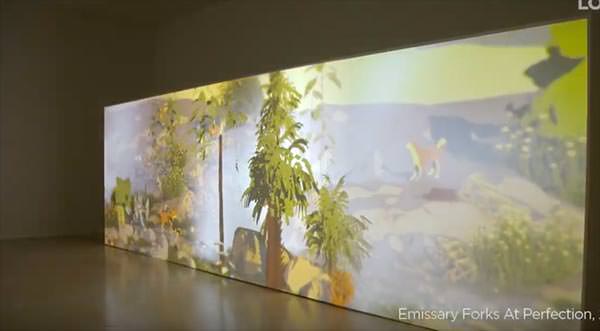 Emissary Forks at Perfection, live simulation and story is one of the trio animated live simulation works created by Cheng between 2015 and 2016. As a dog lover, I was attracted by this screen shot at the first place. Two pairs of eyes are peering through the foliage, partly hidden and partly visible in the middle of the frame. The fox-like face, ears, and legs, with tan and white double-coat, resembling the Japanese dog breed, Shiba Inu, that copes very well with mountainous terrain and was originally bred for hunting in the wild shrub. We can also understand its general appearance from its name. Inu is the Japanese word for dog, and Shiba could mean brushwood in Japanese, and refers to a type of tree or shrub whose leaves turn red in the fall. Therefore, the name of the dog here can be translated as ‘Brushwood Dog’. It also makes sense with the reason why the artist chose this breed of dog in his work. The background is full of sharp, black and blurry stripes of green, creating an illusion of depth making the whole quite dynamic. The cartoonish image and the pigments remind me the animation film Totoro – the little tiny fluffy grey ball – directed by Miyazaki Hayao that is full of mystery and fantasy to animation enthusiasts. What those doggies were doing in the simulation? Were they the emissaries? Did they have any relevance to the animation of Miyazaki? I dare to make any judgement yet the impact of Japanese culture can clearly be seen in the artist’s work.

Looking at part of the simulation, a landscape-size scale, the goal here was always to create a more immersive experience, to distract the audience from the divide between subject and representation. The story took place at many thousands year later and the volcano turned into fatal. The objects kept falling in the landscape; the only thing could be felt was the experiment of the shiba dog. If we got into the three-dimension simulation, we would find there are a lot of characters living in the wilderness, including human, shiba dogs, owls, snakes, some unknown creatures, the waving trees and a volcano. Each element is able to move, to come and go in its relationships with the other elements in its universe. I would say they are living in the world creating by the artist. Nevertheless, they were not Tamagochi petted by human but an evolution of Tamagochi running the function themselves and interacted with each element around. It was hard to find the same image in the story; it was not just a fleeting moment for all elements, but the physical bond between the varying events in a non-completely set scene. Cheng explained his work in the interview. He said that he intended to create a work close to reality, reflecting the relationship between culture and nature by setting up the ‘law’ for each element and letting them interact. Therefore, it is an infinite story with unexpected outcomes, akin to an association, a society, creating by God. He named it ‘the app of consciousness’. He was inspired by the theory – human is not born to be conscious, but accumulated consciousness gradually by learning – in a book called ‘The Origin of Consciousness in the Breakdown of the Bicameral Mind (1976)’.

Take the example, driving, the most dangerous thing to do in daily life. Before going out on the road, the drivers have to learn the rule and pass the exam, to be allowed to drive on the road. The character in the simulation all acts by nature of mind, and also the shiba dog which rekindles the long relationship between the 21st century human and dog in the new age. However, the shiba dog got the mission to rescue the 21st century human, therefore it would impact the behavior of AI and the human. It is, as well, the reason why it is called the emissary. In the simulation, human and nonhuman objects stole attention from each other and influenced on both perspectives, eventually behaviors changed. [W.4]

Objectively, everything within a specific society or isolated group have the same status in certain respects. However, in Cheng’s simulation story, objects are not equal to each other and cannot be replaceable. Geese fly south for the winter; salmon return to their natal streams to spawn; Beagles turn around on their bed before curling up for the night – all of these creatures are acting by their instinct. Cheng subjectively believes human beings relate to the world through a nervous system, through feelings, habits, hardcoded attractions, and once in a while, conscious awareness. The brain is a bridge to connect the vast complexity out there and the vast complexity in here. According to cognitive science, any stimuli into the brain conveys different picture to inner side individually. Cheng not only focus on the interaction between the characters he created in the simulation, but also the mutuality between elements and the audience. How they relate to change, how they hold contradictory perspectives, how they face uncertainty without hiding behind analytics or hiding behind a master, how they find crumbs of curiosity when we feel most anxious. How they initiate our own modest mutations and outgrow our self. Cheng calls all of this the neurological gym. [P.1]

Ian Cheng is obsessed with artificial intelligence. Live simulations were his opportunity to create his own model of the composition of his mind. Technology allows humans to image the future - the positive and negative situation - without getting any harm. At the same time, Cheng is passionate about the potential for these tools to realize ways of relating to a chaotic existence, commonly understood as ‘virtual ecosystems’. Simulations are a dynamic combination of materials, methods, concepts, and subjects that continue to challenge boundaries that in the past, ensured the new generation to interact with digital interfaces, making the development of a digital society possible.

Where will the story end up? It is hard to predict, just as our life, we are all living in a simulation created by the creator. We were born to be intelligent and obtain the ability to learn and think, individually compose a society. Insofar as it is collaborative, a society can enable its members to benefit in ways that would not otherwise be possible on an individual basis; both individual and social benefits can thus distinguish and overlap. However, individual would also destruct the environment and the biosphere. We have created world war, but we are now considering how to save the planet after war. It is an eternity of life courses.