Sunlight penetrates the large windows and sprinkles on the concrete floor, an iron cabinet, full of wires, stands in the seems empty and open room. It is doubtful whether it was mistakenly entered the warehouse. After a careful watch, it is an electrical switchboard enclosures that stands in the middle of the room, doorless and have intricate wires and switch structures, moreover, sticky slugs and thin slices of cucumber are also interspersed in the object. In this tranquil space, slugs drag their camouflage pattern’s bodies and move extremely slow over different lengths of wire like mountains, and leave a sticky transparent footmark on the path traveled. It is Energy Budget 2017, an intriguing work. The name of the work is like a playful joke, producing self-explanatory contrast with slugs. 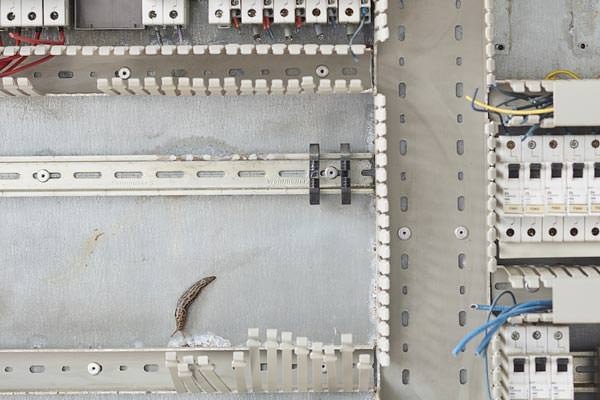 “They thought of my practice as an anthropology of energy, which is a comment I like.”said by Nina Canell,[W.1]  the artist of the work Energy Budget, who born in Sweden in 1979 and now wrote a new annotation for the word ‘sculpture’. Her practice as an object with a flexible condition which relation to an immaterial circularity that is equally sculptural. In a way, sculpture is a status to her.

Therefore, her sculptures are not only one posture, with the deduction of time that there will be more or less slight differences. If you don’t break the layer for a while, that is, if you don’t observe at the piece of work twice, you won’t notice it. Medium Among the works that best explains this sculptural process is a series of works based on Mastic gum, such as the one that was in her first French solo exhibition which named Gum Shelf, 2017, the work consists of a suspended iron plate and a gum placed on top. The gum is placed on the top of the same size iron plate at the beginning of the exhibition, but will fall down due to gravity as time  goes by, the form of gum changes constantly and in a very slow proceed. Because of the artist’s insistence on the material, she discovered the characteristic of thegum. As long as she is interested in some kind of developmental materials, she will take it back to the studio and wait the material to talk to itself. Under such circumstances, she discovered the slow-changing feature of the mastic gum and became a major direction in the post-creation context. In order to be able to discover the hidden secrets and traits of objects, she always collected a lot of useless items, resulting in less and less studio space. 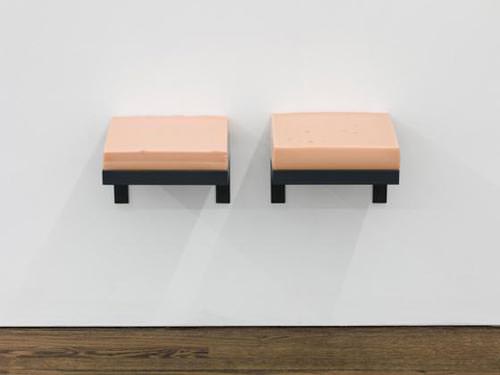 Energy in its many forms has been an integral preoccupation of her work since the beginning, the energy is intangible but can also be called visible. It isdifficult to identify it in the process of changing moving. The sensitive material

such like cable that cleverly connects the invisible energy network, and at the same time it becomes a tangible existence. The first time Nina Canell actually hold one cable in her hand was in Berlin, when the electrical company were digging up the telephone cables of the street near her living place, she was surprised by the cut surface of the subterranean cables, after she negotiation with Deutsche Telekom, they agreed to cut a very small slice of the cable for her. That piece of cable gave her opportunity to look at the material in such a different way.[W.2] This domestic and slightly anachronistic object that somehow enabled a kind of conflation of the experience of the internet as being something linear and lossless fluid with something incredibly physical dirty andreal. Two dimensions combine together and create such a strong syntax of plasticity and materiality of Internet. Since that time, Nina Canell has taken a lot of interest in the historical and economical significance of these infrastructures.Nina Canell’s work be composed of physical objects and immaterial substances, which tend to be altered by unseen energetic forces. Once in aninterview, she mentioned that Writer Nicole Starosielski suggests we look at these cables as part of the environment—places where capital, labor, and knowledgehave sunk into the Earth’s surface.[W.3] In 2015, the Moderna Museet held Nina Canell’s solo exhibition “Mid-Sentence”, showed her sculpture group BriefSyllables, which consists of unearthed and dissected electricity and communicationcables.These cables isolated but dense, seem absurdly mute, dysfunctional, and the sections of cables are densely arranged in biological patterns, like viruses and cells under the microscope. This mundane object exhibits an amazing face at different viewing angles, and the visual impact produces physiological discomfort. A separate cable creates a clash with the restlessness of the heart. Their cross sections appear to form an emptinessor a dissolution. As the artist writes: “Cables are the opposite of sentimental.[W.4] 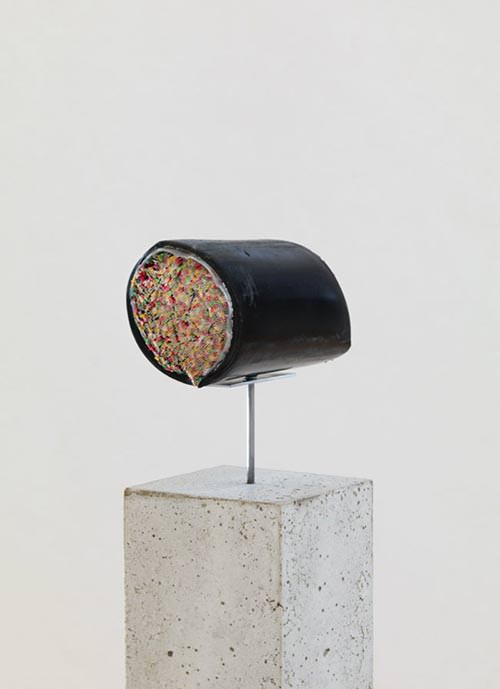 Canell has chosen to call this her first solo exhibition in Sweden as ”MidSentence“ due to the reason that she says “this can be interpreted as a point, not necessarily halfway, but as a freestanding coordinate.” It can be understood as a situation where anything is still possible. [W.5] There is also a work called Of Air in this exhibition, a glass container with 3,800ml of air which Nina Canell and her collaborator Robin Watkins captured from the Russian chemist Dmitri Mendeleev (1834–1907)’s studio, where he had formulated the periodic system after falling asleep at his desk. This work can be linked to the Marcel Duchamp “50cc of Paris air” 1919, both of them are trying to use the “air” which is invisible but also ubiquitous as a creative material. Nina Canell generally consists of materials that are normally used for specific purposes, moreover, the nature of the process also as the material of her work.

About ‘sound’ this wonderfully elusive sculptural material, Nina Canell and Robin Watkins have collaborated on a number of film and musical recording projects, as well as live performances at different sorts of events. They started collaborating on artworks after Watkins made a record of glitchy acoustic pop and cloudy electronics (The New Heat/Obscured by Light, 2005) inspired by one of Nina Canell's assemblages.[W.6] Their work underscores extra-linguistic elements by using music as an agent of transformation and catalyst for the collective

imagination. The work Flexions, 2016, which in “Dolphin Dandelion” first Nina Canell’s solo exhibition on Paris, is a collaboration between two artists. Watkins worked as a musician in a more diversified way with Nina Canell as a sculptor, using a metal alloy, Nitinol, that is extremely sensitive to temperature changes, which colloquially called “memory wire.” When short bursts of electricity heat up the wires, their previous shape is reactivated. This choreography, activated by fluctuating temperature, is accompanied by sound: each time electricity flows through the different parts of the installation, the signal is converted into an inaudible, high-pitched tone sound, once been describe as a love song in insect society. [W.7] This unexpected argument convincing that love is an invisible but powerful objects can truly be received, full of symbolism and associations to forms of affection.

Many of Nina Canell’s works set up relationships or relations between things, elements, materials, and also between people. The body of the visitor encountering into the works, such as Perpetuum Mobile (25kg), consisting of a bowl of water and a paper bag of cement. Ultrasonic waves induced a rising mist, causing the building material to slowly harden over. With the addition of the viewer, the environmental humidity is also affected, and this work presents different processes and results in each exhibition, the visitor does act as a kind of inseparable component of the work, they completes and fulfills the work. In her work that reveals the poetic potential of physical processes which cannot be verbalized, probably because it is difficult to see "human leading" in it. Rejection of anthropocentrism and let the object talk autonomously, not just contrasting all other beings as variations of "object", which can be linked to the basic principles of object-oriented ontology.[W.8] Nina Canell’s works also express that humans is not a “subjects” over and against nonhuman beings as “objects”. All object relations, human and nonhuman, are said to exist on equal ontological footing with one another. [P.1]

The same discussion of sculpture and time evolution as Nina Canell can refer to Crystallized Project (2008-2012) by Tokujin Yoshioka, which now display in the Centre Pompidou at the exhibition - DESIGNING THE LIVING"MUTATIONS/CREATIONS 3”. Through the accumulation of time, the process of crystallization completely changes the original appearance of the object. Furthermore, the music of Frederic Chopin and Pyotr Ilych Tchaikovsky are played during the growth process of crystals and the crystallization are changed with the vibrations of sound. In this work, Tokujin Yoshioka focus on the time and transformation of forms, which can compare to Nina Canell’s work ‘Gum Drag (2017-2018)’. Both of them based on the specific conditions to slowly changing forms and have external force intervention, the crystal chair has the rhythm of music unpredictable to change the process of crystallization, and the uncertainty of the mastic gum is even more. In addition to the omnipotent conditions such as the humidity of the surrounding environment, the illumination of the sun, and the breeze brought by the viewer,  etc., will have an impact, which is a more open influence factor than the crystal chair. Moreover, the perception is different: the crystal chair is the expression of growth; the gum is relatively reversed, deformed, destroyed, and unable to resist the external force. But two works similarly take time this key factor, through the accumulation of time to be able to see subtle changes.[W.9] 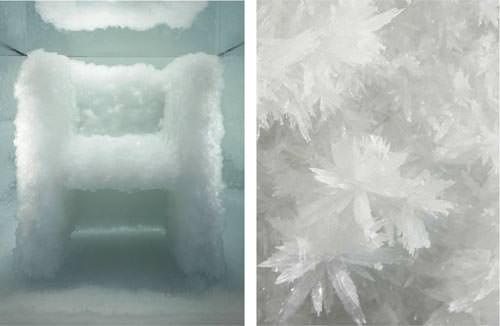 Nina Canell’s sculptures are not constant but full of precariousness. On the road of creation, she does not pursue the end result, instead, grasping the process of each change and waiting until something happened. Trying to lead everyone to experience the beauty of the scenery on the road, explore the inexhaustible potential of the materials. Her works also have some challenges in patientness. In this fast-changing era, people may not be able to stay in front of the work more than two minutes. In order to appreciate those subtle changes and sensitive movements of her works, we need to focus and wait for a while. Invisible elements, air, the passage of time, dynamic motion, temperature, the connection between people and things, or the connection between things and things, are integral parts of the material. How romantic it is! The invisible link in some fo her works seems to imply love, the most indiscernible and great force in the world.

[P.1]HARMAN, Graham. Guerrilla Metaphysics: Phenomenology and the Carpentry of Things.

[P.2]CANELL, Nina. To Let Stay Projecting as a Bit of Branch on a Log by Not Chopping It Off.