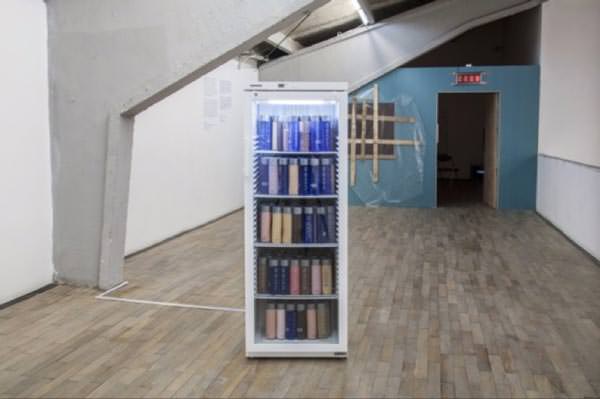 It looks like a vending machine at my first glance, standing lonely in the quiet, empty and white exhibition space. When approaching, I would notice it is a refrigerator that is crammed with several VOSS bottles between which there even no space. But when I looked closely at the objects that fill the bottle, I was definitely confused. Unknown objects with different pigmentary decoration brimming the VOSS bottle which is the most expensive bottle water in my knowledge. Looking at the colors of the solid object inside the bottle, some of them likes the color of the sky, some likes the color of the soil, and most are light pink, tan, carnation, that is analogous to the colors of human skin. Watching the caption, the solid object inside is silicone which is well-known for its function of augmentation surgery. The surgeon of here was Pamela Rosenkranz.

A Zurich based artist, Pamela Rosenkranz was born in 1979 in Uri, Switzerland. In general, she is defined as a multimedia artist in the contemporary field. She started her career as representing Switzerland at the Venice Biennale in 2015. Now she is represented by Miguel Abreu Gallery in New York. According to art critics or exhibition catalogs, Pamela Rosenkranz’s works are often framed with the connection to object-oriented ontology (OOO), speculative realism as well as the conception of molecular sculpture. She used to discuss different questions through transforming complexity to simplicity around the topic of human existence, globalization, naturalness or consumerism, etc… by shedding light on the presentation of different materials to interpret her conceptual ideas, ignoring the creativity of the artist itself.

Light and liquid are also common elements in Pamela's works of art.

“I think that it is more interesting to talk about art in terms of the material that determines the work, rather than the artist’s identity …”

The exploration to materiality by Pamela Rosenkranz, in some way, is manifested through the choice of colors. Her artworks rarely have complex compositions of colors, on the contrary, generally, most of them are made monochromatically. The adoption to monochrome is not only attractive and enjoyable to the viewers visually, but also better applied to the materials that she used, at the same time, the artist intends to take the monochromic interpretation as the representation of her conceptual ideas. Especially the lack of complexity of colors makes viewers more concentrate on the work itself. What Pamela Rosenkranz used is not just the simple monochrome like what adopted by Kazimir Malevich who is the first one to take the monochrome in the history of art, instead, the color she adopted more looks like chemical, synthetic and artificial components composed in which echoing her exploration to biology and chemistry, interpreting her interests in the question of the interactions between human and nature. For Pamela Rosenkranz, colors are a kind of representation.

For example, blue is one that often occurred in her creation.

According to Pamela Rosenkranz herself, she interpreted that “the perception of blue as a color within the visible spectrum of the human eye started at a stage when creatures only existed under the sea; after life started to thrive on land, the eye began to grasp the full spectrum that we see today and as a result of this heritage, we can still perceive much more of the color blue than any other color that our eyes are able to perceive.” To some extent, blue is the representation of nature, the existence of cosmos as well as human life. So the presence of the blue element in her works is echoing the universe.

It is a very simple installation that the composed materials are easy-find. What is attractive, eye-catching of the work is the blue water flow. It’s made by a kind of dye named E131 which is a water-soluble blue dye that is chemically synthesized; aluminum can also be added to dyes in some manufacturing processes, so it is also an additive called "aluminium ingot". Obviously, taking usual materials in daily life such as the ceramic sink, water pipe … as a part, she added something unnatural to compose the work, aiming at highlight the influence of the artificial technology to nature or to people’s life.

In addition, the adoption of varying familiar or fleshy hues which is one of the marks of her style is suggestive to human presence.

According to artist herself, the conception of biology which could connect to art triggered after which she was attracted by the flesh tones initially. This color is often used in paintings, especially portraits, to represent the visual effects of the human body. But in modern times, advertising uses it to reliably raise awareness. “It seems important to confront the constructed advertising image, where we encounter an idea of beauty, and to develop a deeper sensitivity for the physical basis of attraction,” she said. She considered almost every aspect of life as a material reality. She added the element of flesh tones to her works, which is an imitation of the contemporary consumer society. At the same time, the works themselves are also critical.

I can probably divide Pamela Rosenkranz’s color usage into two. She prefers to use colors close to human skin, suggesting physical reality and desire. She also often used very industrial colors that is looked unnatural and instantly recognizable as artificial. Usually, to some extent she mixed the two in one work, criticizing the huge influence of industrial society on the human existence naturally and showing viewers the confrontation. 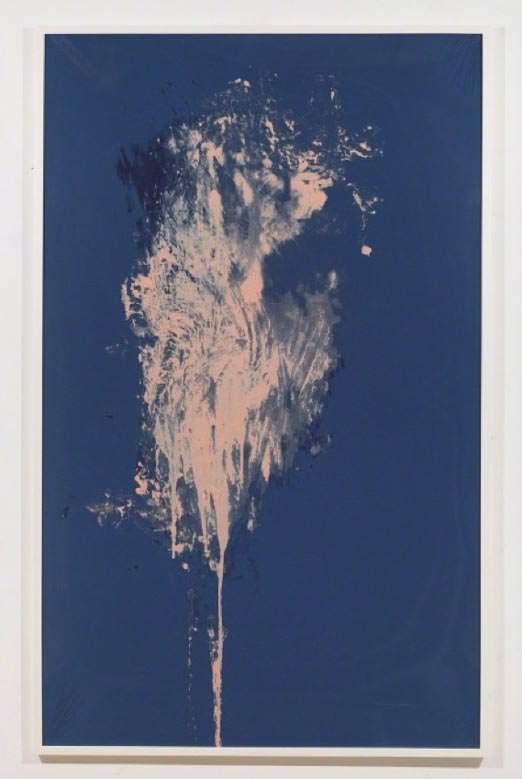 She is also an artist who works on the topic of the role of women in her art practice. Sometimes, the creating procedure, paying a tribute to the art history, imagination, and criticism that hidden in her artworks fully express her answer to the question of women exist in the society. For Pamela Rosenkranz, her focus is not just the basic questions which known by the public well such as gender difference or feminism, but on how the role of female as a new and different type of the society, especially on the arts, to maximize the functions or the contributions to our living space. She eliminated differences in identity and gender; her status as a woman is also seen as meaningless.

This is one of the gesture paintings from Pamela Rosenkranz. The same rhythm with the adoption of skin-colored pigments, this gesture painting is also unique in the choice of the background texture, what’s important, the creating process. Different from traditional painting, Pamela Rosenkranz took spandex instead of canvas to put the pigments on. As we all know, spandex is a kind of synthetic fiber known for its exceptional elasticity. It is a type of material that is often used to make swimsuits, spandex pants, etc, which are merchandises, especially for women. In terms of the creating process, Pamela applied acrylic to her body, mimicking the style of Yves Klein who did the anthropometry performance. But she didn’t touch anything about mysticism. Indeed, she added her own explanation about how to explore the female body further. She took the Viagra, the man stimulant before she executed the work. Through changing the sense of woman to sex and external attraction, identifying the limitation of a female body, this painting explores “how perceptions of our physicality aspects are in fact culturally constructed”. Throughout the history of art, it records this experiment and becomes evidence of female presence.

Throughout the use of external forces, especially biological aspects, the artist reshapes the role of women. As to say that the process of the action painting by the artist herself after taking the Viagra is the process of dematerializing female body. In the construction of her works, a woman is classified as a physic substance. So, to some extent, a female is also understood as a kind of "material" for artistic creation. She explained that “everything is physical”. Every step of her practice explained the importance of materiality to her and in her works.

Material refers to the external element that make up the artwork.

The reason why we speak that materiality is the central question for Pamela Rosenkranz is that materials give more power to her. With concentrating on materials, the internal part of the work can be totally presented on the surface of the work. It removes any subjective influences, letting the viewers go inside the work itself. By doing this, materials help her deeply understand the relationship between people and objects, that is to say, the material world. That is coherence with the notion of speculative realism.

In addition to considering the adoption of materials, Pamela Rosenkranz uses a variety of nonphysical elements such as light, smell, hormones, bacteria and other organic components to reflect the core concept, materiality, of her works through the occurrence of chemical and biological reactions in the molecular part which is not an eternal state because these elements lack realism, but they can penetrate into every corner of the exhibition space and stimulate all the senses of the audience. The practice of Pamela Rosenkranz also provides a touchstone for the notion of molecular sculpture. In this series practice of molecular sculpture, the most representative work is the one which she made for the 56th Venice Biennale.

The work is decorated with synthetic materials such as aspirin, bacteria, hormones, etc … which made the whole space producing light, color, scent and sound. Pamela Rosenkranz thinks that even if we are not familiar with these materials, they are everywhere. These immaterial elements guide viewers to the pavilion and stimulate their senses at all times. It seems that they’re working with the site and they become immersive which imply the changing of the relationship between the viewer and the object because the artwork directly has influences on the viewers.

For artworks framed within the molecular sculpture, the domination of the visitor is stronger than the work itself which is against the notion of “art can gain aura” by Benjamin that actually the influence of an art work is stronger than the viewers. Returning to the work itself, this type of work not only carries out the transformation of self-material in the process but also changes the overall environment it builds, even in the audience's body. The chemical reaction of material causes changes in itself.

She adopted the consumer goods to reflect the influence on human and society by answering the questions, covering technology, globalization, consumer society, and chemical, biological process, as well as taking human body as material, speaking of a human-indifference universe. She insists that “I am concerned with exploring how scientific findings change popular conceptions of what it means to be human, and that can be quite confrontational.” Whether her sculptures, installations, or works in other mediums, show a subtle observation of the human body and its surroundings, exploring the various ways in which we define ourselves as human beings through the never-ending study of materiality.